JBOD EVOLUTION AND COMPARISON WITH OTHERS

2. It has an array of hard disks that not have been configured according to the RAID (for “redundant array of independent disks”) system.

3. JBOD is used in reference to a system that has each individual disk show up an individual logical volume in the computer.

4. Like RAID system that stores the same data redundantly(to achieve fault tolerance) on multiple disks that will appear to the operating system as a single disk, JBOD also makes the disk appear to be single one, it shows that by combining the drives into one larger logical volume.

5. JBOD is multiple physical disks in an external cabinet array connect to a single server, it provides higher storage capacity with increases no. of drives and data is not protected. 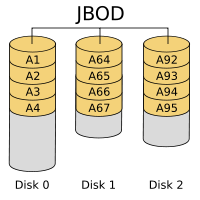 6. The official term for JBOD is “spanning” – used to refer to a computer’s hard disks that haven’t been configured according to the RAID system to increase fault tolerance and improve data access performance.

COMPARISON BETWEEN JBOD AND RAID SYSTEM:

1. JBOD vs. RAID Scalability:  JBODs are preferred by many as they are relatively easy to scale by just adding another drive.  The JBOD configuration also allows for the combined space of all the drives to be used by the end Operating System.  You can also mix different disk sizes in JBOD. RAID treats a collection of drives as a single storage unit, so RAID configurations don’t allow different disk sizes to be used in the array. It requires all drives to be of similar capacity and model type.

2. JBOD vs. RAID Affordability:  SCSI, SAS and Hardware RAIDs are much more pricy than basic SATA disks and Controllers used in JBODs.

RAID is a more expensive solution, largely because it is less flexible and uses higher price point hardware components.

3. JBOD vs. RAID Trends: JBOD has become more and more of a preferred solution as storage becomes more massive and complicated.  Also, as other supporting technologies emerge, any concerns about JBOD in the past that were centered around data recovery and performance have largely gone away.

EBOD (enterprise bunch of disks) is emerging as a new paradigm also. RAID, offers an incredible assortment of high performance products in this category.