In computer networking, a server is a computer designed to process requests and deliver data to other (client) computers over a local network or the Internet.

Network servers typically are configured with additional processing, memory, and storage capacity to handle the load of servicing clients. Common types of network servers include: 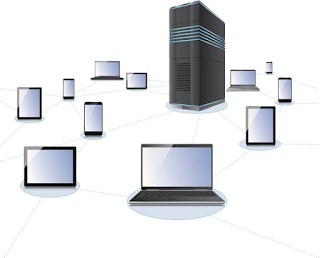 Numerous systems on the Internet employ this client-server networking model including Web sites and email services.
An alternative model – peer-to-peer networking – enables all devices on a network to function as either a server or client as needed.

The word cluster is used broadly in computer networking to refer to a number of different implementations of shared computing resources. Typically, a cluster integrates the resources of two or more computing devices that could otherwise function separately (often, workstation or server devices) together for some common purpose.

A Web server farm (a collection of networked Web servers, each with access to content on the same site) function as a cluster conceptually. However, purists can debate the technical classification of a server farm as a cluster, depending on the details of the hardware and software configuration (failover characteristics, etc.).

Finally, a category of third-party hosted Web sites called Web proxy servers is available to end users on the Internet for their Web browsing sessions.

FTP server:
The File Transfer Protocol (FTP) is a standard network protocol used to transfer computer files between a client and server on a computer network.
FTP is built on a client-server model architecture and uses separate control and data connections between the client and the server. FTP users may authenticate themselves with a clear-text sign-in protocol, normally in the form of a username and password, but can connect anonymously if the server is configured to allow it. For secure transmission that protects the username and password, and encrypts the content, FTP is often secured with SSL/TLS (FTPS). SSH File Transfer Protocol (SFTP) is sometimes also used instead, but is technologically different.
The first FTP client applications were command-line programs developed before operating systems had graphical user interfaces, and are still shipped with most Windows, Unix, and Linux operating systems. Many FTP clients and automation utilities have since been developed for desktops, servers, mobile devices, and hardware, and FTP has been incorporated into productivity applications, such as web page editors.