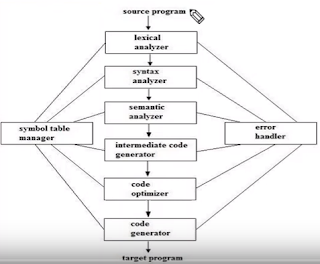 Q1. What is A COMPILER?
Answer :The software which convert a high-level programming language into a machine language is called a COMPILER. Ex. C++ COMPILER.

Q4. What is Linear Analysis?
Answer :Linear analysis is one in which the stream of characters making up the source program is read from left to right and grouped into tokens that are sequences of characters having a collective meaning.Also called lexical analysis or scanning.

Q5. What Are The Classifications Of A COMPILER?
Answer : Single- pass, Multi-pass, Load-and-go, Debugging or optimizing.

Q6. Mention Some Of The Cousins Of A COMPILER.
Answer : Preprocessors, Assemblers, Loaders and Link-Editors.

Q10. What is Token?
Answere: Sequence of characters that have a collective meaning.