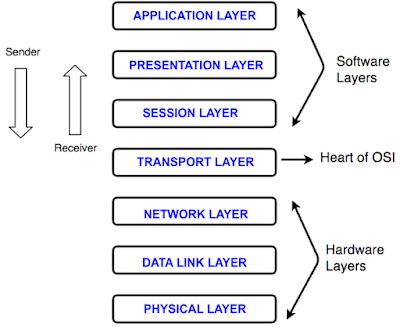 The seven Open Systems Interconnection layers are:
Layer 1: The physical layer. This layer conveys the bit stream across the network either electrically, mechanically or through radio waves. The physical layer covers a variety of devices and mediums, among them cabling, connectors, receivers, transceivers and repeaters.
Layer 2: The data-link layer. This layer sets up links across the physical network, putting packets into network frames. This layer has two sub-layers: the logical link control layer and the media access control layer (MAC). MAC layer types include Ethernet and 802.11 wireless specifications.
Layer 3: The network layer. This layer handles addressing and routing the data — sending it in the right direction to the right destination on outgoing transmissions and receiving incoming transmissions at the packet level. IP is the network layer for the internet.
Layer 4: The transport layer. This layer manages packetization of data, then the delivery of the packets, including checking for errors in the data once it arrives. On the internet, TCP and UDP provide these services for most applications as well.
Layer 5: The session layer. This layer sets up, coordinates and terminates conversations. Its services include authentication and reconnection after an interruption. On the internet, Transmission Control Protocol (TCP) and User Datagram Protocol (UDP) provide these services for most applications.
Layer 6: The presentation layer. This layer is usually part of an operating system (OS) and converts incoming and outgoing data from one presentation format to another — for example, from clear text to encrypted text at one end and back to clear text at the other.
Layer 7: The application layer. This is the layer at which communication partners are identified — Is there someone to talk to? — network capacity is assessed — Will the network let me talk to them right now? — and where the data or application is presented in a visual form the user can understand. This layer is not the application itself, it is the set of services an application should be able to make use of directly, although some applications may perform application-layer functions.