PPL
A VIDEO LECTURE ON PARSE TREE
Click here to view on YouTube
PARSE TREE
A parse tree is a diagrammatic representation of the parsed structure of a sentence or string.
In the syntax analysis phase, a compiler verifies whether or not the tokens generated by the lexical analyzer are grouped according to the syntactic rules of the language. This is done by pare tree.
Than from parse tree intermediate code can be generated.
A parse tree for a grammar G is a tree where
Ambiguity:
A grammar that produces more than one parse tree for some sentence is said to be ambiguous.
There are two ways to draw a parse tree:
1) Top-down Approach:
2) Bottom-up Approach:
Leftmost and Rightmost Derivation of a String:
1) Leftmost derivation: A leftmost derivation is obtained by applying production to the leftmost variable in each step.
For example, S –>  a+b*c 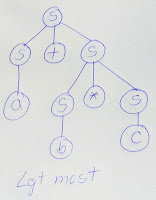 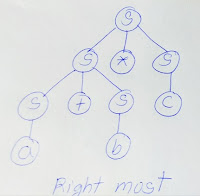